As drivers, we trust that the complex parts and systems in our cars will function as intended to get us safely to our destinations. However, when one of these parts does not work as designed, the result can be catastrophic. A defective car part could lead to a crash,  causing injury or even death. Car owners should regularly evaluate their car’s performance as well as be aware of potential issues with important car parts. Below, the product liability attorneys at Peter Angelos Law identify the seven most commonly defective car parts and the potential damages that they could cause. 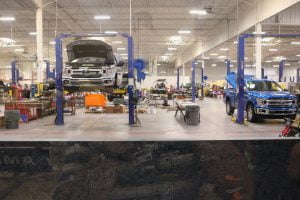 Car owners should take their cars to a mechanic’s shop regularly to evaluate their car’s performance as well as be aware of potential issues with important car parts.

The seat belt is one of the most important safety innovations in modern vehicles. Seat belts act as the main safety restraint in a car, and there can be detrimental consequences when they don’t work how they’re engineered to. Defects in seat belts include broken latches, malfunctioning tension detector, retractor failure, spooling, and defective webbing. These issues can prevent the seat belt from working properly and may lead to injury.

Airbags are another one of a car’s main safety mechanisms designed to prevent injury in the case of an accident. An airbag can be deemed defective due to a  multitude of problems, including failure to deploy, deploying when they are not supposed to, or deploying too quickly or with too much force.

If an airbag fails to deploy during an accident, the driver or passengers may sustain serious injuries that could have been prevented had the airbag deployed. In the instance where an airbag deploys unnecessarily, those inside the car may be injured by the impact of the airbags. Additionally, unnecessary airbag inflation can distract the driver, potentially causing an accident. If an airbag deploys improperly in an accident, inflating too quickly or with too much force, those in the vehicle could sustain injuries from the airbag that result separately from the impact of the car accident.

The most common defect with door latch mechanisms is with the pawl spring, a coil that brings a door handle back to its closed position. Broken or defective pawl springs can lead to serious injuries.

For example, if a car door is closed with too much force and the pawl spring does not perform as designed, the door latch could snap and cause the door to bounce back, possibly hitting and injuring the individual who closed the door. Additionally, if a passenger is leaning against the door from the inside of the vehicle while it is in motion, a defective door latch could cause the door to swing open, resulting in the individual being launched from the moving vehicle.

The fuel pump is the mechanism that propels fuel from a vehicle’s tank to its engine. A defective fuel pump could cause the car to fail to start. In addition, fuel pump defects can cause the vehicle to lose power while accelerating. This loss of power could potentially lead to an accident while driving on a busy road.

Defects with the brake system in an automobile can also lead to unpreventable accidents. In many modern car models, dual brake systems are designed to reduce the risk of brake failure. However, even with this advanced safety feature, defects in braking systems can still lead to injury or even death.

Although windshield wipers may not be a feature that is used every time a car is driven, when they fail to perform as intended, the consequences can be serious. If a car’s windshield wipers don’t work effectively or at all, a driver’s visibility in rain or snow is greatly impaired and could cause an accident.

According to the National Highway Traffic Safety Administration (NHTSA), the fatality rate per vehicle mile of travel is nearly three times higher than during the day. It’s imperative that a car’s headlights function properly to allow for high visibility. Low visibility can cause a driver to lose sight of the road and possibly crash.

What to do if Your Car’s Parts are Defective

It’s important to take your car in for regularly scheduled maintenance to ensure that all parts are working as designed. Consulting with a trusted mechanic can help you diagnose any problems that may arise. Be sure to stay informed about current news in regards to automobile recalls. The NHTSA provides a free tool that allows you to check if any parts in your car have been recalled. In addition, all manufacturers of recalled parts are required to notify those impacted by a recall by mail.

If you or a loved one was injured in a car accident that resulted from a defective car part, you may have a product liability case. To discuss your case and determine the next steps, contact the product liability attorneys at Peter Angelos Law.  We have offices in Baltimore, MD as well as Harrisburg, PA. Call toll-free at 1-800-556-5522.