Our top attorneys are now handling claims for victims of injuries and deaths from the toxic water contamination at Camp Lejeune between 1953-1987.

We represent the wives and daughters of marines, who were stationed at Camp Lejeune, and who have suffered horrific injuries, including miscarriages, fetal death, infertility, as well tumors on ovaries, stomach, esophagus, and brain. We know firsthand the tragedy that daughters and wives of marines have experienced, and we are here to help them seek just compensation.

If you or a loved one were exposed to the water supply (via drinking water and/or bath water) at Marine Corps Base Camp Lejeune, Camp Geiger, Camp Johnson, or Marine Corps Air Station (MCAS) New River, in North Carolina and subsequently suffered adverse health conditions, you may be entitled to compensation.

Areas affected include, but are not limited to the following: 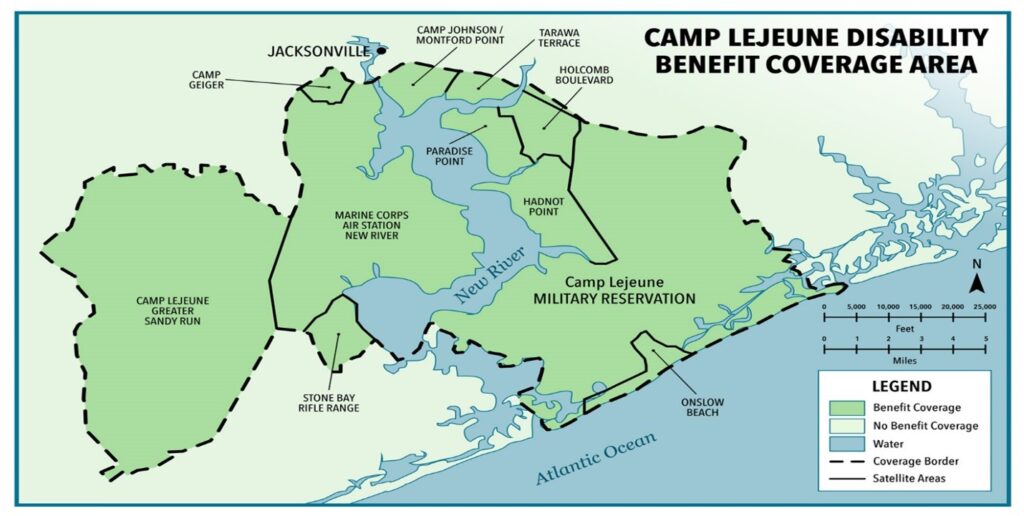 From 1953 to 1987, the water supply at Camp Lejeune, Camp Geiger, Camp Johnson, and MCAS was dangerously toxic. The water contained significant chemical contamination and its contaminants have been linked to multiple cancers and other health-related issues and diseases. Our environmental litigation lawyers can also discuss the potential Camp Lejeune water contamination settlement amounts.

In an effort to determine the impacts of contaminated drinking water on public health, ATSDR – a branch under the Centers for Disease Control and Prevention– has conducted a thorough assessment at Camp Lejeune. Through rigorous investigations, their findings have revealed possible links between toxins in the water system and various diseases including cancers, birth defects, and somatic illnesses such as Lymphomas, Myeloma, Cardiac Defects, Systemic Sclerosis, and Scleroderma. Get access now to view these latest discoveries via this official link from ATSDR.

Even if you have sought legal recourse for a Camp Lejeune water contamination claim in the past and been denied, you may still have a case. Congress has recently passed new legislation - the Camp Lejeune Justice Act of 2022 - to allow victims of contaminated water at Camp Lejeune and Camp Geiger to file lawsuits for damages.

In the past, the statute of limitations prevented victims and/or family members of those exposed to Camp Lejeune toxic water from suing for damages. In those cases, most people only qualified for a disability claim that did not provide adequate compensation. This new law changes that, allowing victims to bring a civil lawsuit even if they have already claimed disability.

If you or someone you know lived or worked at Camp Lejeune between 1953 to 1987 and suffered water toxicity-related illnesses, such as cancer, Parkinson's, or any other medical problems, you may be eligible for settlement compensation from the government.

Allowing our team of lawyers to advocate for you and your loved ones may be the most important thing you do today!

The President recently signed into law; a bi-partisan bill named:  "The Camp Lejeune Justice Act." The bill grants Camp Lejeune's toxic water victims who ingested and/or bathed in tainted water at Camp Lejeune from 1953 to 1987 - the ability to seek financial compensation for exposure to toxic drinking water and their injuries. If you believe you are entitled to compensation, contact Peter Angelos Law now at (410) 649-2000.

Camp Lejeune Toxic Exposure: Do You Qualify for Compensation?

The Camp Lejeune Justice Act of 2022 applies to all individuals, exposed for at least 30 days to water that was supplied by or on behalf of the United States, between August 1, 1953, and December 31, 1987, and who were injured by such exposure, including:

- All members, of all branches of the United States Military, who served at either location

- Cadets, soldiers, and officers who served at either location

- All Spouses, children, and other family members who were exposed at either location

- Babies exposed in utero, via their mother

- Veterans, Reservists, and National Guard members who served at either location

- All On Base Contractors and Employees

Contact Our Expert Team of Attorneys For a Free Consultation Today!

Our attorneys have recovered billions of dollars on behalf of injured individuals in past lawsuits and have successfully pursued thousands of cases for groundwater contamination in the past. We will use our decades of legal experience on behalf of you and your loved ones.

Consequently, if you or a loved one were exposed to contaminated water at Camp LeJeune, North Carolina, Camp Geiger, or Marine Corps Air Station (MCAS) New River, North Carolina, between 1953 and 1987, it is important you contact us at (410) 649-2000, for a free, no-cost consultation to ensure you receive compensation you may be owed.

It is unclear if the water at Camp Lejeune is still contaminated. While the Environmental Protection Agency (EPA) has set a maximum contaminant level for one of the chemicals found in the water, it is possible that other chemicals are present at levels that could be harmful. The Department of Defense (DOD) is currently investigating the extent of the contamination and working to address any potential health risks.

What poisoned the water at Camp Lejeune?

These chemicals are all human carcinogens, meaning they can cause cancer. TCE and PCE have also been linked to other health problems, such as kidney cancer, liver cancer, and non-Hodgkin's lymphoma.

When was the water at Camp Lejeune contaminated?

The water at Camp Lejeune was contaminated from 1953 to 1987. The contamination was first discovered in 1980, but it is unclear how long the water had been contaminated before that.

Who was exposed to the contaminated water?

Anyone who drank the water or used it for cooking or showering was exposed. This includes Marines, sailors, family members, and civilian employees. It is estimated that as many as one million people were exposed.

What health conditions are linked to the Camp Lejeune water contamination?

There are a number of health conditions that have been linked to the water contamination at Camp Lejeune. These include:

Other cancers and disease, which are currently being investigated include:

What are the symptoms from drinking contaminated water at Camp Lejeune?

There is no easy answer to this question since the symptoms will vary depending on the individual and the contaminants that they were exposed to. Some of the more common symptoms that have been reported by those who drank the contaminated water at Camp Lejeune include:

These are just some of the many health problems that have been linked to exposure to the contaminants in Camp Lejeune's water supply. If you or a loved one has suffered any of these health issues, it is important to speak with a qualified class action lawsuit attorney about your legal rights.

How much is the compensation for Camp Lejeune water contamination?

The amount of compensation you may be eligible for depends on the severity of your illness and how long you were exposed to contaminated water. It is too early at this time to determine what the amount of compensation will be for each case. It is crucial to contact an aggressively proactive Camp Lejeune class action lawsuit lawyer to obtain representation in preparation for receiving compensation if you fall under the eligibility for this lawsuit.

At Peter Angelos Law, our attorneys fight fiercely for your justice. If you believe that you or a loved one has been affected by the water contamination at Camp Lejuene, or tried to pursue compensation in the past to no avail, act now and contact our environmental litigation lawyers today.